poetfades2black if you use these for any purpose. Thanks :) 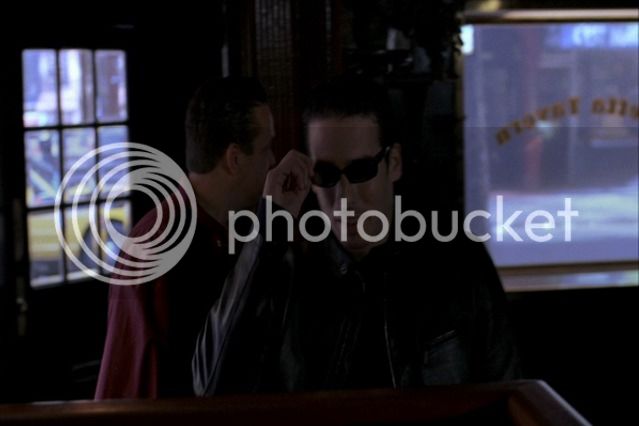 You won't catch Maria Bello's Detective Jane Timoney wearing lip gloss, but she will hand out plenty of attitude — and the fedora stays.

Homicide detective Jane Timoney's hair is messy, not tousled, and those bruises on her face are fresh, from a knock-down, drag-out with a perp. She comes by her bloodshot eyes honestly, earned through a mixture of Scotch on the rocks and work-related insomnia.

Timoney, as played by Maria Bello in NBC's upcoming drama "Prime Suspect," is just as raw on the inside. She's blatantly ambitious and opportunistic, scooping up a high-profile case moments after a fellow cop drops dead of a heart attack. And she thumbs her nose at male colleagues so sexist they refer to themselves as the "beef trust."

Cunningham doesn't reference "NYPD Blue's" Andy Sipowicz lightly — she was a writer on the seminal series and is a lifelong fan of hard-nosed detectives. She based Timoney not only on the character made famous in the groundbreaking British version of "Prime Suspect," played by Emmy winner Helen Mirren, but also on classic American TV cops, all of them men.

Hey guys! I'm sorry for this comm going silent during the summer. The new tv season is almost here and we're back too! Don't forget to follow us on Twitter!

I like the show more witch each promo! Hopefully we'll get a full set of HQ promotional photos soon. The NBC Upfront is in NY today but so far I could only find photos of Maria Bello.

And important news, Kirk's character had a name change and he's now called Det. Luisito Calderon (it was Det. Phil Carter before). What do you think?

Prime Suspect will air this fall on Thursdays, 10PM on NBC. No premiere date yet, we'll let you know as soon as we hear something. You can also follow the official show Twitter @NBCPrimeSuspect

Kirk's new show gets a pick up from NBC! Are you excited for the fall? The pilot filmed in NY last month (sorry for the lack of updates here, I was going to but life was busy) and Kirk was spotted on the set few times but I haven't seen any pics yet. With this news, and Seth Gabel being promoted to series regular, I don't think we'll see much (if any) of Kirk in season 4 of Fringe. So I hope PS is really goos and does well and won't get canceled too soon.

Unfortunataly we don't have any info if Kirk will be appearing in any of the last 4 eps of Fringe this season. We do have some more pics from ep 3.13 'Immortality' and they are great!